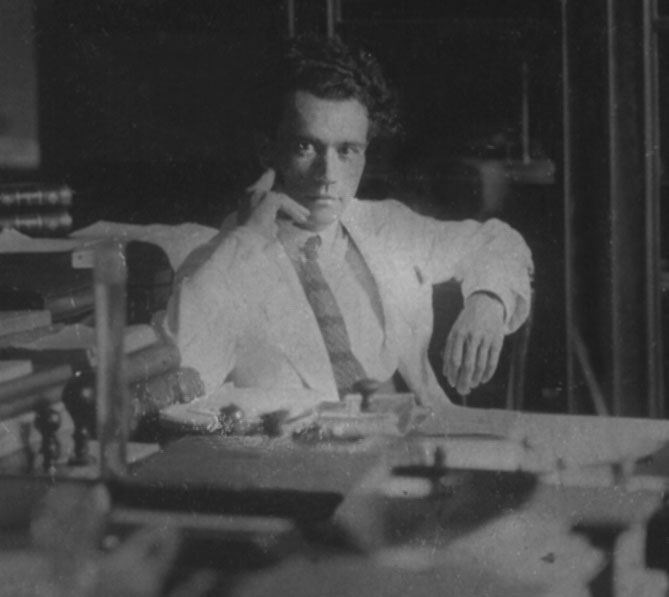 As a teenager, Horia Hulubei led a life marked by his condition as an orphan, his father dying in 1911, and by all its entailing deprivations. Despite all hardships, he finished high school as a valedictorian (in 1915). He soon after joined the Physical Chemistry Faculty of Iasi, but had to leave the following year: with Romania entering the war, HH is sent to the front, fighting battles as a young infantry sub-lieutenant. On the recommendation of General Berthelot, he is sent to France to train as a military pilot. Hulubei fights bravely, is injured, and, in recognition of his merits, he receives the French Legion of Honour. He remains “under arms” (to use his own words) for four years (1916 - 1920), divided between the eastern and western fronts.

His keen interest in aviation and the need to survive financially in a war-torn Romania keep him, two more years, away from University, where he returns in 1922 to continue his studies. Though only a student, his astounding qualities recommend him for a position as a substitute tutor - the first stage of a brilliant academic career. In 1923 he publishes his first scientific paper; in 1926 he is awarded the bachelor’s degree with the distinction Magna cum Laude. After working as an assistant to Professor Petre Bogdan for a year, Hulubei changes the physical chemistry laboratory of the University of Iasi with the physical chemistry laboratory of the Sorbonne University, where he would be working in Jean Perrin’s team, a recently Nobel Prize winner (1926).

His research focuses on very modern - promising and challenging - areas such as X-ray diffusion, the multi-Compton effect, obtaining X-ray spectra of gas, identifying new elements, starting from the knowledge of their X-ray spectra. He submits to the doctoral committee a “primary” thesis (première these), entitled “Contributions to the study of quantum diffusion of X-rays”, and a “secondary” thesis entitled “Modification of Raman spectra under the action of various physical agents”. Both theses are based on original devices or methods, developed in Jean Perrin’s laboratory: the first uses a high-performance X-ray spectrograph, developed by Yvette Cauchois; the second a method of his own, developed by Hulubei.

With his excellent knowledge of the field, with state-of-the-art equipment, in a both demanding and homelike exemplary scientific environment, Hulubei tackles highly topical issues that would dominate the most productive scientific decade of his life. Horia Hulubei and Yvette Cauchois identify new spectral lines where they notice the presence of new elements, meant to fill three of the empty positions in Mendeleev’s periodic table: numbers 85, 87, and 93. The unprecedented difficulties in identifying these elements prompted the international community to give credit for their discovery to those who isolated them chemically, a decade or two after the pioneering work of Horia Hulubei and Yvette Cauchois. However, the major contributions made by Hulubei and Cauchois are recognized by the recent and very rich literature of chemical history, the two scientists being considered as co-discoverers of those elements.

Toward the end of the ’30s, Hulubei shuttles between France and Romania. He takes part, with an enthusiasm and skill warmly welcomed by the French partners, in the major exhibition organised in Paris at Palais des découvertes. As a lecturer and then a professor at the University of Iasi, then at the University of Bucharest, he launches the course in Matter Structure across the Romanian higher education. Alongside his colleagues, young men George Manu and Radu Grigorovici, he works on the creation of the first atomic and nuclear physics laboratories in Romania, initially located in the building of the University of Bucharest.

In the unsettled times of the monarchical dictatorship (1938 - 40), he tries to set into motion the “King Carol II Institute of Scientific Research”, which was intended to operate in Cluj. Hulubei had a decisive contribution to the publishing of “Disquisitiones Mathematicae et Physicae” (mathematics and physics research), the first Romanian scientific journal of repute (although very valuable articles had also appeared in modest “bulletins” such as “Bulletin de la Société Roumaine de Physique”), where researchers from Romania and France get to work together. Unfortunately, the enforcement of the Vienna Dictate and the loss of Northern Transylvania, including Cluj, forestall these projects.

The intellectual and human qualities of Hulubei, as well as the great appreciation he enjoys in France, recommend the scientist for a diplomatic position: he would be the cultural adviser of the Romanian Embassy in Paris, in April, May, and June 1940. He would therefore be the direct witness of the French defeat (22 June 1940), which was felt like a historic catastrophe not only in Paris, but in Bucharest as well.

In the years of immense frustrations following the loss of territories in 1940, which psychologically affected the patriotic youth in particular, Hulubei would be a providential presence at the head of the University of Bucharest. He wisely managed students’ frustrations and knew how to use his position as rector to resume the scientific connections with the French State (the Vichy government), obviously at a much more modest level, but reassuring all the more for the great defeated party. His gestures of recognition for the values of the French culture, by awarding the title of Doctor Honoris Causa to scientists of democratic orientation, as well as of material support for the French students and universities, were extraordinarily well received by our former ally.

Romania’s Sovietization, occurring right after 23 August, would risk serious consequences for Hulubei. His close connections with France (“servitude to the Western imperialism”, using the doublespeak of the era) and his position as rector filled during the years of the anti-Soviet war (“collaborationism” using the same jargon) placed Hulubei in a vulnerable situation. His arrest in the spring of 1945 was the most dramatic consequence; fortunately, such episodes did not repeat.

Moreover, the industrialization of the country, a priority of the communist politics, made Hulubei an indispensable piece. The creation of the Institute of Physics of the Academy of the Popular Republic of Romania (1949), soon after converted to the Institute of Atomic Physics, started off in a bleak environment for Hulubei, who would be a victim of politruks and informers. Fortunately, Hulubei’s wisdom, scholarship, skilfulness, and industry convinced the communist government of the need to keep him at the helm of Romanian science. From the mid-’50s his position continued to strengthen to match the amazing success of the Institute. In two decades, Hulubei managed to raise the Romanian physics from an insignificant level to a globally competitive one.

Creation and Development of Institutional Physics Research in Romania (1949 - 1969)

Despite the presence of very valuable personalities - from Augustin Maior to Șerban Țițeica, to name but two - the Romanian institutional scientific research was being carried out in a few university laboratories. It took the exceptional scientific, human, and organisational qualities of Hulubei, and the firm policy of industrialization pursued by the communist power, for the spectacular development of the Romanian physics to unfold. It started, as already stated, with the creation of the Institute of Physics of the Academy of the Popular Republic of Romania (1949), which later became the Institute of Atomic Physics (1956), and went on with the creation of the Bucharest Institute of Physics (IFB) and several regional research centres. Besides Hulubei’s great qualities, we should eulogize in this context the devotion, hard-working nature, industry, and patriotism (such an outdated word!) of a generation that, while often leading a life of privations difficult to imagine nowadays, frequently facing an unforgiving ideological rigor, made possible to establish, in as long as a decade, an elite institute.

The scientific and technological accomplishments, in the most diverse areas, from nuclear medicine to computation technique, from blast furnace wear monitoring to neutron physics, can be viewed in a report written under the coordination of Hulubei (link1) or in more recent articles (link2). 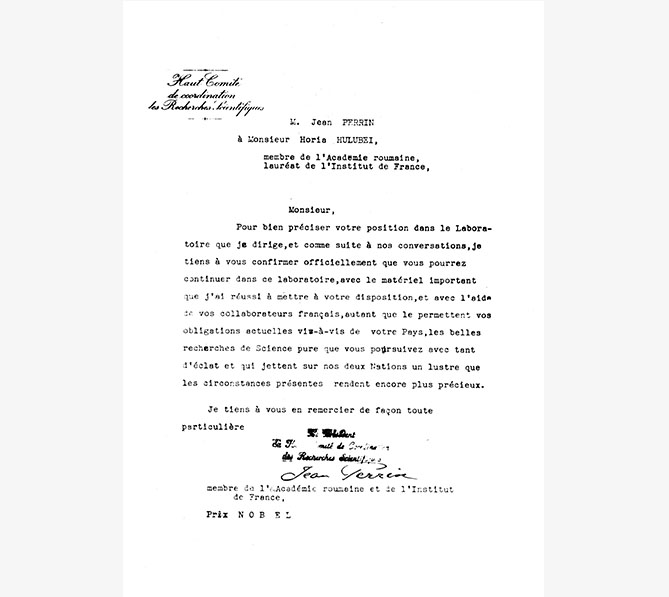 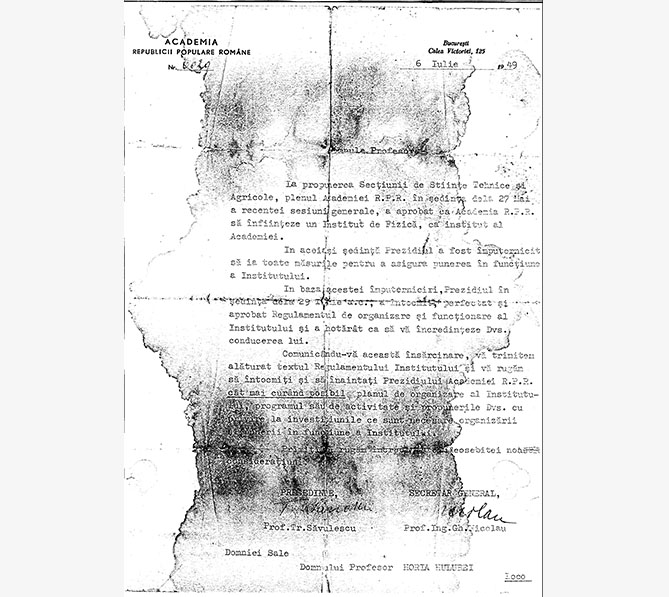